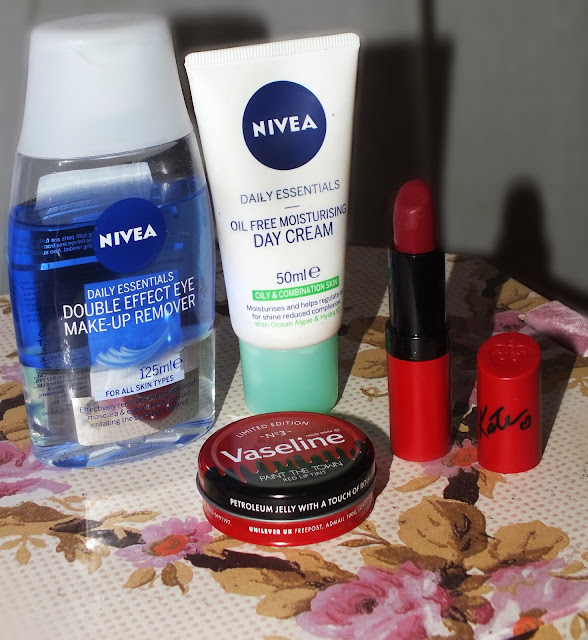 Once again another month has passed and left me feeling a bit lost.. It feels like yesterday that it was just the beginning of September or the middle of Summer for that matter. Time defiantly moves fast, which I'm in two minds about.

Alas! Here is my first monthly favourites, consisting of products I've been using a lot this month and products of course that I'm liking.

First up is the Nivea Double Effect Eye Make-Up Remover which I'm now on my second bottle of already! It's a really good eye make up remover that hasn't irritated my eyes. I was previously using the Rimmel Gentle Eye Make Up Remover which I swear was leaving my eyes blood shot as well as not being very good at actually removing eye make up. This Nivea product though is really good at removing everything. It does leave an oily residue which doesn't both me that much as you can just wash that off with a bit of water. Before you use it you're supposed to shake the two different colours together which I keep forgetting to do, oops.
Boots | Superdrug

Next is another Nivea product which is the Oil Free Moisturising Day Cream. I bought this because I have acne prone skin, which I'm currently on medication for. One of the many woes of having acne prone skin is not only the acne itself but the greasy skin that comes with it. Since on the medication my acne has reduced dramatically and my skin has got less oily.. still I don't want to add any more excess oil to it when I don't need it. For me, this works well as a moisturiser beneath foundation and I don't think it's increased my breakouts. When you apply it, it has a cooling feeling which feels really nice and it also, makes the skin feel really soft. Although it's only 50ml it's reasonably priced at £4.00 and you can find it cheaper in Home & Bargains. Also, it is currently £3.00 in Superdrug.
Boots | Superdrug

Now for the lipstick that everybody has been taking about on the blogsphere, Rimmel Kate Moss in 107, a lipstick that I bought last year in Summer despite it being a Autumnal shade. It's a deep berry shade which has a red tinge to it. One of the things I like about it is that it's matte, as I think I suit matte lip products more than glossy. It is drying so make sure to use lip balm. It smells lovely though, I almost want to eat it. In my opinion, these are the best smelling Rimmel lipsticks. I defiantly need to buy myself more berry/purple toned lipsticks. Werdily, I always thought this lipstick didn't have a name but according to Superdrug the name is 'Wine', who knew eh?
Boots | Superdrug

Finally is something I didn't intend to buy, the limited edition Vaseline in Paint The Town. Now I bought this thinking it would tint my lips red, it doesn't it just makes them look a bit of a darker pink. I sort of bought this because of the packaging and the name which reminded me of the song Where The Lonely Ones Roam by Digital Daggers (featured on Pretty Little Liars, one of my many tv obsessions). I don't usually buy Vaseline because people tell me it's actually bad for your lips? Anyway, I think the best way to wear this is over another lip product to give a nice glossy shine. I've been wearing this a lot the past week and it does give a lovely look. Also it has a spiced berry scent which smells divine!
Boots | Superdrug

If you have any questions on any of the products mentioned, let me know :) Feel free to leave a comment or a question and I'll get back to you :)